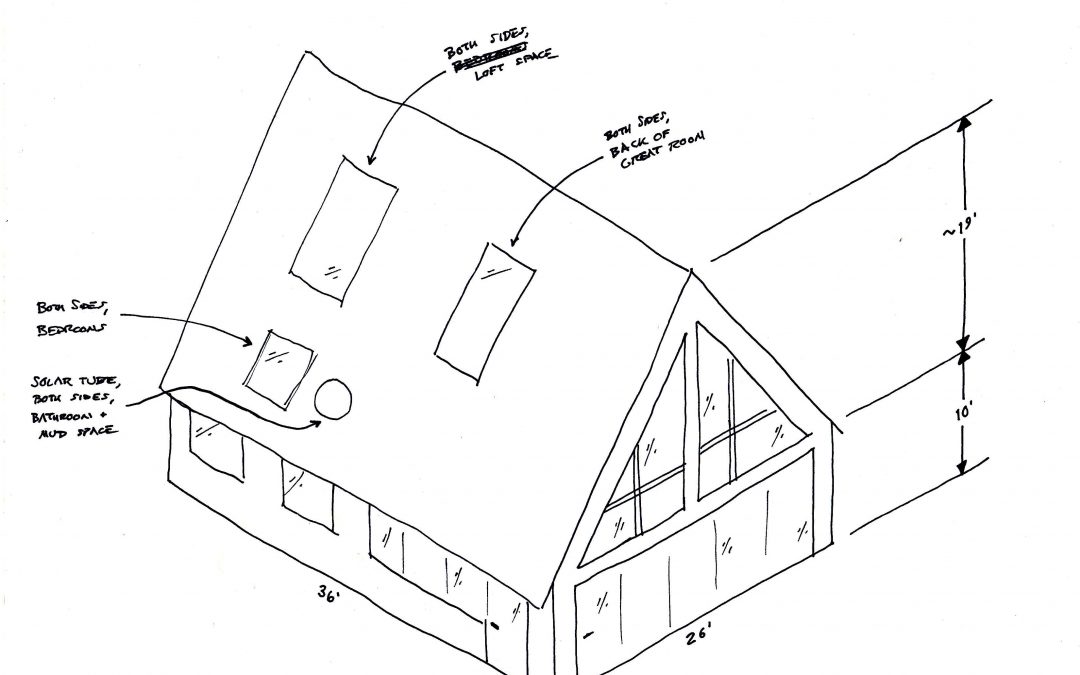 Crazy House Drawings, Round One

One look at the “unfolding module process diagram” or the “sketched section of folding roof” may result in some gawking, coffee-spitting, guffaws, and perhaps even the closing of this blog. All understandable!

If you have, however, continued to read this blog despite the drool that dripped from your gapping, gawking mouth…and despite the coffee that is now splattered on your screen and maybe keyboard…and despite the awkward stares you received from your side-splitting guffaws…thanks! We are crazy, we know.

So, here is a quick, simplified explanation as to some of the gibberish we’ve got running around in our brains…

Our home will by no means be a ‘tiny’ home, but it will be a rather small-ish home! It will be 36’ long by 26’ wide on its first floor. The loft space will be about 23’ by 16’ and go above only the bedroom, bathroom, and mudroom areas. The total square footage is estimated to be about 1,304 square feet.

As you can see in the axonometric sketch (such a big word…) we really want to incorporate a high usage of windows…perhaps too many. But that fact is to be soon determined as we currently are also undergoing some cost analyses. All windows would have to have high R-values and be made by a Passive House certified window manufacturer- which also adds to the immediate price tag.

The skylights would illuminate the loft space, bedrooms, and the back section of the ‘great room’ (‘great room’ just sounds so pompous…). We would use what are called ‘solar tubes’ to bring natural light into the bathroom and mudroom area. Solar tubes are neat in that they are literally a tube in which the entering sunlight bounces around before it fills the larger living space, thereby creating a more even distribution of light.

Our home will be small. And depending on how many children we have, it is only going to get smaller. The ‘window walls’ you see at the front of the ‘great room’ are not stationary, allowing our small space to get larger. They can fold to allow the home to be made almost entirely open to the outdoors. The windows above the sink and kitchen area will also be foldable- thereby creating an open bar to the deck outside. A great example of how these guys work is to take a look at Zola’s “BreezePanel Folding Walls” (William drools everytime he watches the video).