Before we can throw an example of a Passive House at you, a few things should first be explained…

At one point, PHIUS was the American branch of PHI. However, in 2011, the contract between the two was terminated and PHIUS became its own entity. Up to 2015, their standards were the same. In 2015, PHIUS created standards that were climate specific and have been fine tuning them ever since.

According to PHIUS, PHI promoted a “one-size-fits-all” energy metric for all homes and buildings attempting to achieve Passive House standards (essentially, the energy required to heat/cool and make a passive home run should not exceed a set amount). While PHIUS admires the ambitions of PHI, and admits to seeing them as an inspiration in the field of sustainable architecture, PHIUS sees a flaw in attempting to apply a set performance target across all climate zones. PHIUS found that a set standard especially became a problem in some of the more extreme and varying climate zones present in North America. PHIUS therefore designed a program which calculates the standards for Passive House according to the home or building’s intended location regarding climate, construction costs, and regional energy costs. That means, the standards for where we want our home to be, in central Pennsylvania, would have very different standards than a home in, say, Arizona. This allows our home to meet annual heating and cooling loads that are appropriate to our area, as well as make building a Passive House affordable. The affordability of Passive House design is essential to PHIUS; they believe that widespread application of sustainable building will have a better overall impact on the environment.¹

What standard are William and I deciding to adhere to?

Admittedly, the research on PHI and PHIUS criteria is ongoing. We have not yet made a decision, as both institutions are legitimate avenues to certifying passive homes. Stay tuned for future blogs as we explore both options.

In RPA’s design and construction of the home, they set five essential principles for themselves in order to achieve Passive House standards: solar orientation, high insulation, high performance windows, air tight enclosure, and balanced ventilation with heat recovery. While we take a quick look at each of their principles, be sure to keep in mind Grandma’s knitted sweater and that favorite windbreaker! 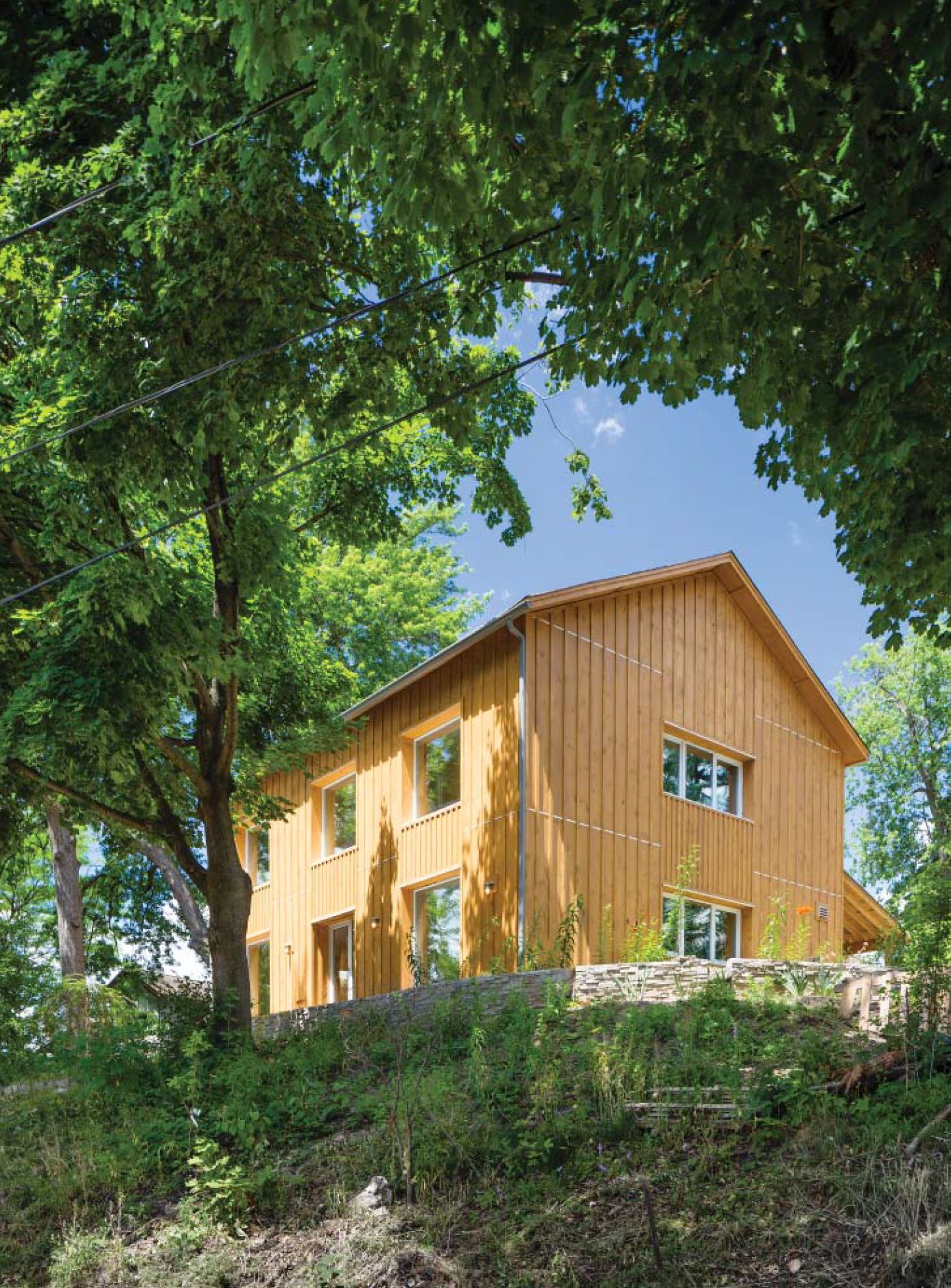 View of the Southeast Facade 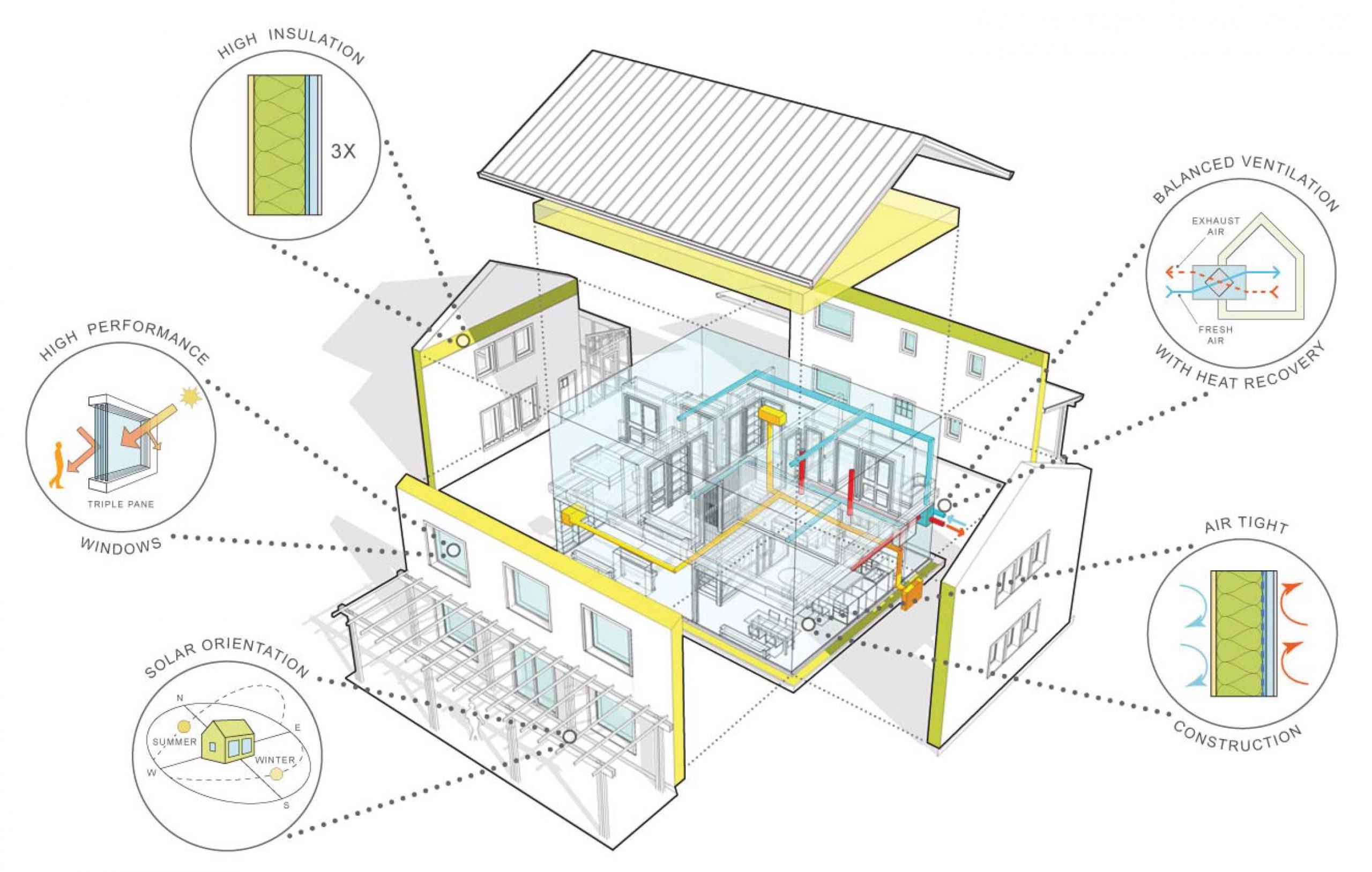 The sun is essentially free energy. It provides warmth and natural light. In the Northern Hemisphere, Passive Houses typically orient a majority of their windows in the Southern direction so to maximize on this free energy source. RPA positioned the Scranton House deliberately against the street grid of Scranton, so to make their southern facade (which has the most windows) almost entirely due South. As stated in Blog Two, Passive Houses require a lot of strategic insulation. To keep oneself warm in the winter, most individuals will wear a fluffy like layer of clothing to help retain their own body heat, like Grandma’s good ‘ol knitted sweater! The same with a house. In order to retain heat in the home, a calculated and deliberate amount of insulation is required.

Typical homes have one layer of 4 to 6 inches of fiberglass insulation. RPA used two thick layers of insulation in the construction of the Scranton Passive House. The first layer consists of 4 inch thick RockWool insulation. The second layer is comprised of about 12 inches of cellulose (usually a form of clumpy recycled wood and paper products). RPA made certain in their design that their insulative barriers made a continuous blanket around the home’s entire thermal envelope. From the wall’s transition to the roof, to the wall’s transition to the insulated foundation, RPA made sure that no area of the home was left unprotected by insulation. Glass is a high conductor of heat, and therefore homes with lots of windows typically lose a lot of energy. William and I are admittedly very curious as to how RPA balanced a decent usage of windows while also maintaining Passive House standards…

Besides simply using their windows strategically by putting most of them on the South facing side of the home, RPA also used high quality, triple pane windows with an R-value of 7. Most homes today have dual pane windows, which means the window has two pieces of glass and an air pocket between the outside and the inside. Triple pane windows have three pieces of glass and two air pockets between the outside and the inside. Two air pockets create a better insulating window, meaning that much less heat is lost through it.

Quick note on R-value: An ‘R-value’ of a material is a measure of its thermal resistance, which is based on conductivity. Conductivity is the movement of heat through a solid… and heat will always conduct (or move) towards the colder surface. Glass is a high conductor of heat, and therefore has low thermal resistance (heat travels through glass faster than it does through some other materials). Windows typically have a low R-value of about 2 or 3. The Scranton Passive House’s windows had an R-value of 7! To understand R-value better, stay tuned for our next blog.

Beyond Grandma’s knitted sweater, Blog Two also mentioned that awesome windbreaker: a Passive House’s airtight barrier. Grandma’s super fluffy knitted sweater is super warm, until the wind hits. So what do you do? You throw a windbreaker overtop. Same with a house. All that insulation is great, but it means nothing if wind (and water!) can seep through.

RPA did not build the Scranton Passive House’s walls with just two layers of insulation. In between the layer of RockWool insulation and layer of cellulose, RPA designed an air/vapor control barrier with ZIP sheathing. Similar to the insulation, the air/vapor barrier wraps the entire way through the home’s thermal envelope – even the transitions from walls to ceiling, and walls to foundation, were seamless. Just like having a tear in your windbreaker would be inefficient in retaining your body heat, having a hole in the air/vapor barrier would be inefficient in retaining the home’s heat. 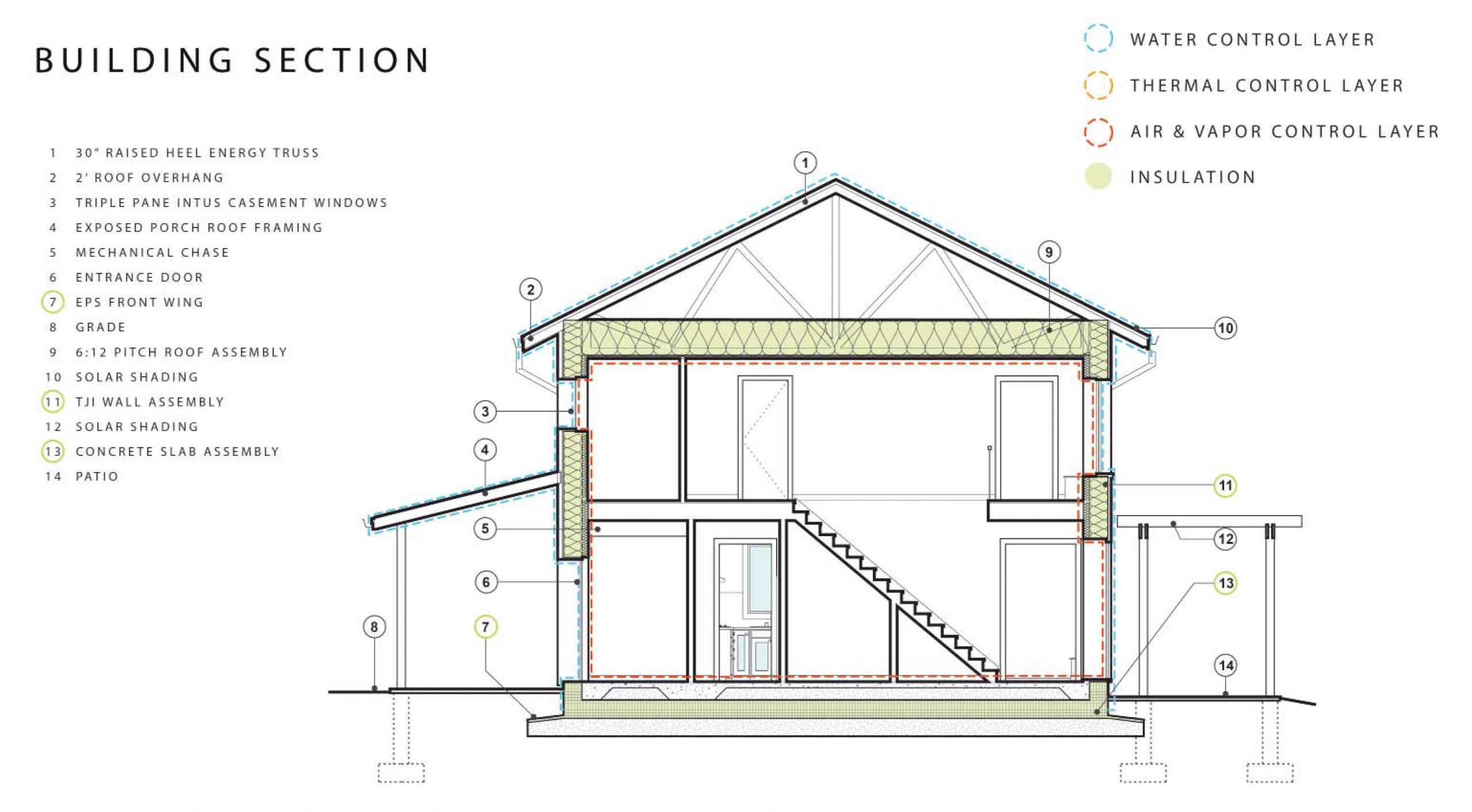 With such an ample amount of continuous insulation, and a well sealed building envelope, the Scranton Passive House needs a controlled way to breathe. Just like your own body’s ability to inhale and exhale when you are wearing Grandma’s knitted sweater AND a windbreaker, a Passive House has a controlled supply and return source for air.

RPA used Renewaire ERV (Energy Recovery Ventilator) for the Scranton Passive House’s ventilation and a Mitsubushi ASHP (Air Source Heat Pump) for the home’s heating and cooling. An ERV has two seperate intake ‘tubes.’ For example, in the winter, one tube supplies fresh, cold air into the home, and the other tube exhausts stale, warm air out of the home. The fresh, outdoor air in the supply tube is warmed and humidified by the air in the exhaust tube, allowing fresh, warm air to enter the home. The tubes never allow the air to mix, they simply allow the exhausting indoor air to warm the supplying outdoor air. An ASHP, in a very simple sense, is an air conditioner which can do heating and cooling. ASHPs are extremely efficient in heating a home and use very little energy.

RPA not only achieved, but surpassed, Passive House standards by the way they committed to the five principles they set for themselves: solar orientation, high insulation, high performance windows, air tight enclosure, and balanced ventilation with heat recovery. Passive House itself is a concept. Within the concept, there is no single way to achieve Passive House standards; the building must simply meet source energy limits, airtightness limits, and space conditioning criteria. Those specific standards met by the Scranton Passive House (set by PHIUS) will be explained in a later blog, so stay tuned!

William and I are still in the process of researching and studying other Passive Houses so to help us build our own small home. We are keeping notes on the different usages of insulation, building materials, techniques to tackle moisture, window placement… and any and all other components that will go into making our first home a Passive House. Let the fun continue!